A number of years ago, Biblia Global donors helped fund Bibles to Black Hmong (Boua) Christians.  This is a brand new translation into Black Hmong and the first translation of the Bible into this people groups language! We have received reports and pictures of these Christians receiving their first Black Hmong Bibles. Thank you to all our supporters for making projects like these possible! You can read more about the Hmong HERE. The following are picture of the 2018 distribution. Faces have been blurred and location cannot be disclosed for security reasons as this is a highly sensitive region in Asia. 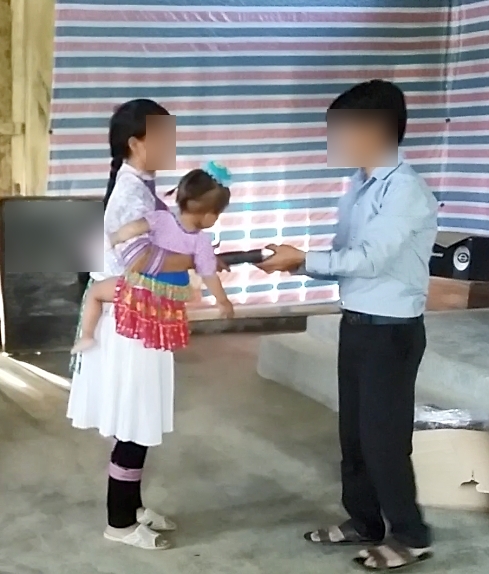 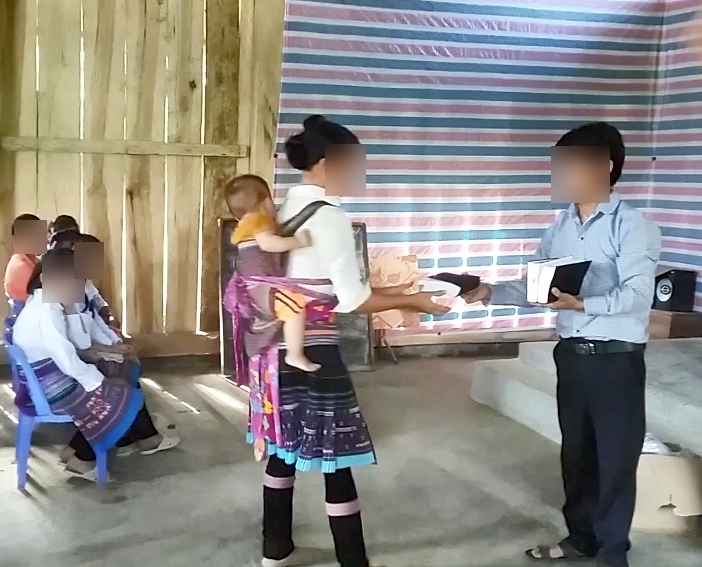 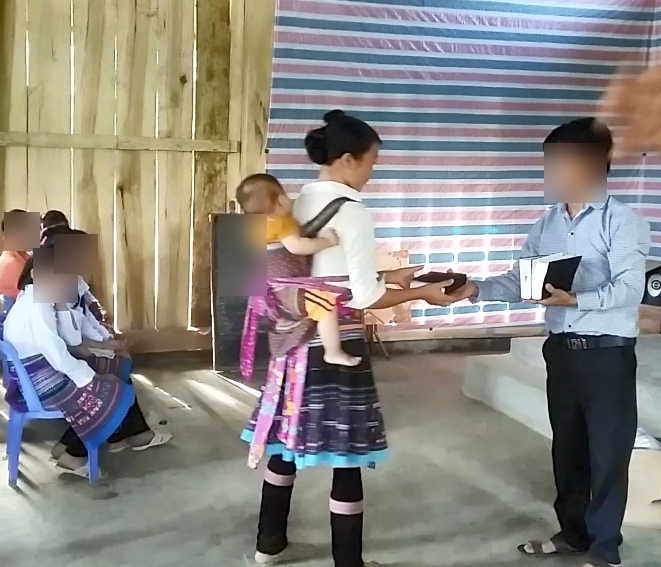 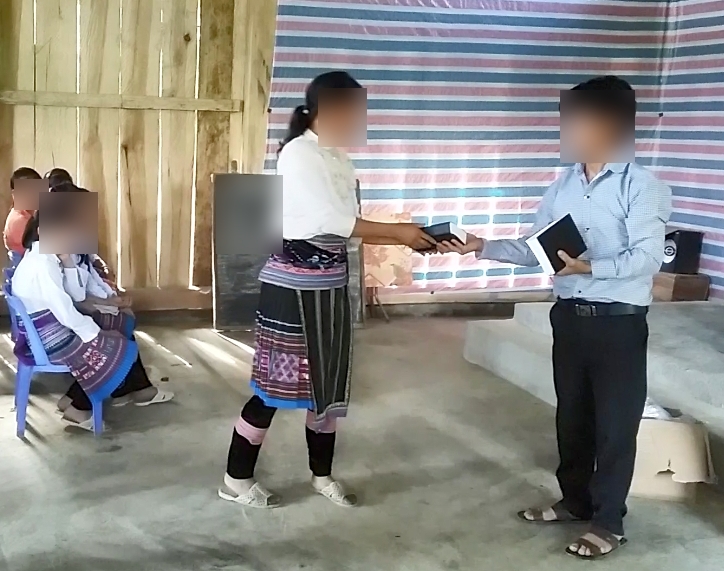 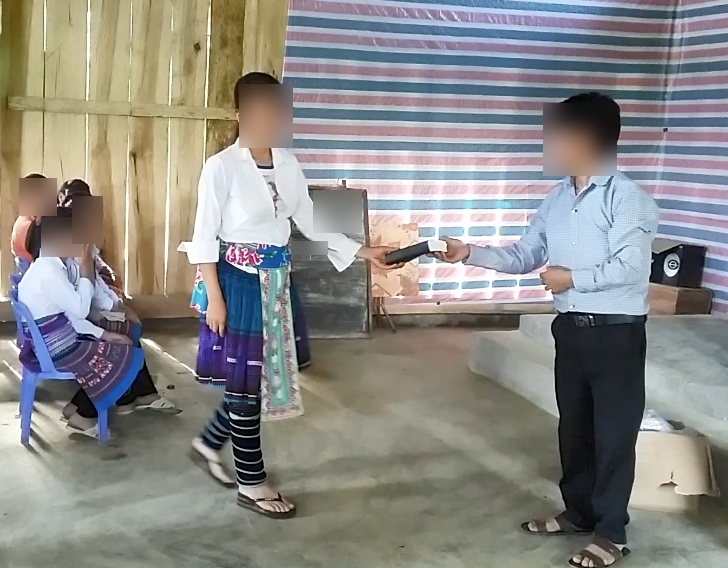 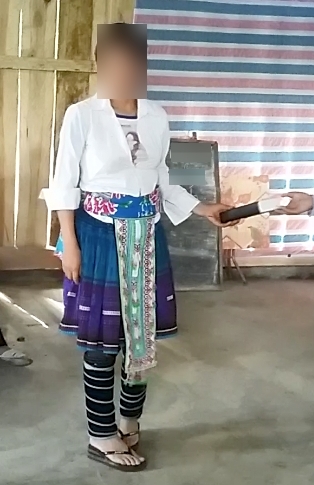 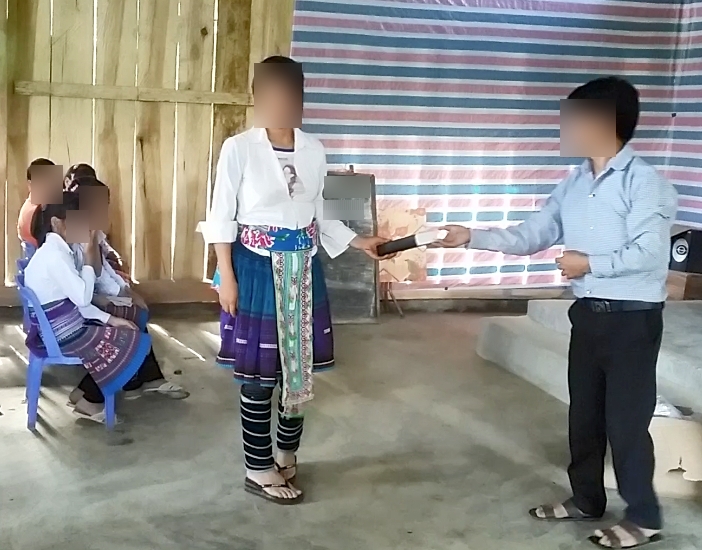 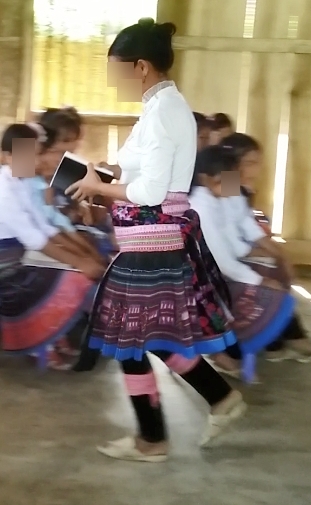 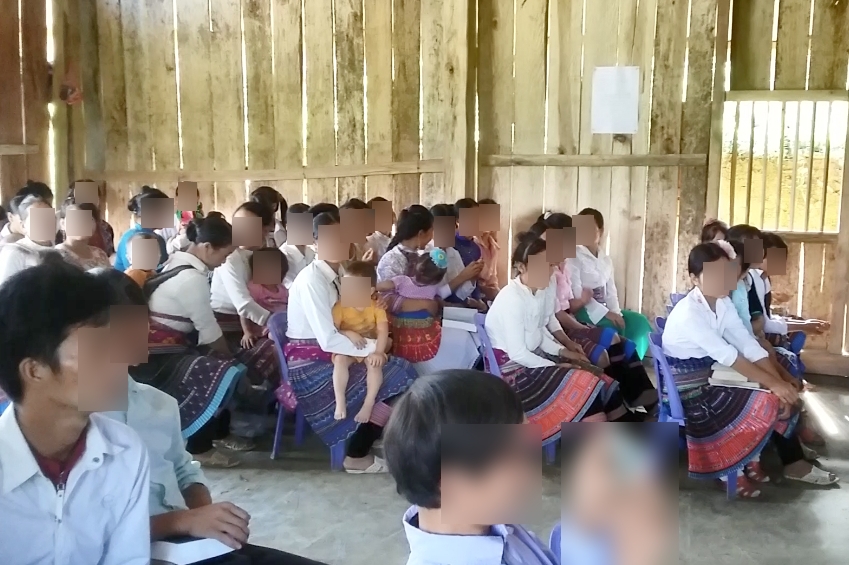 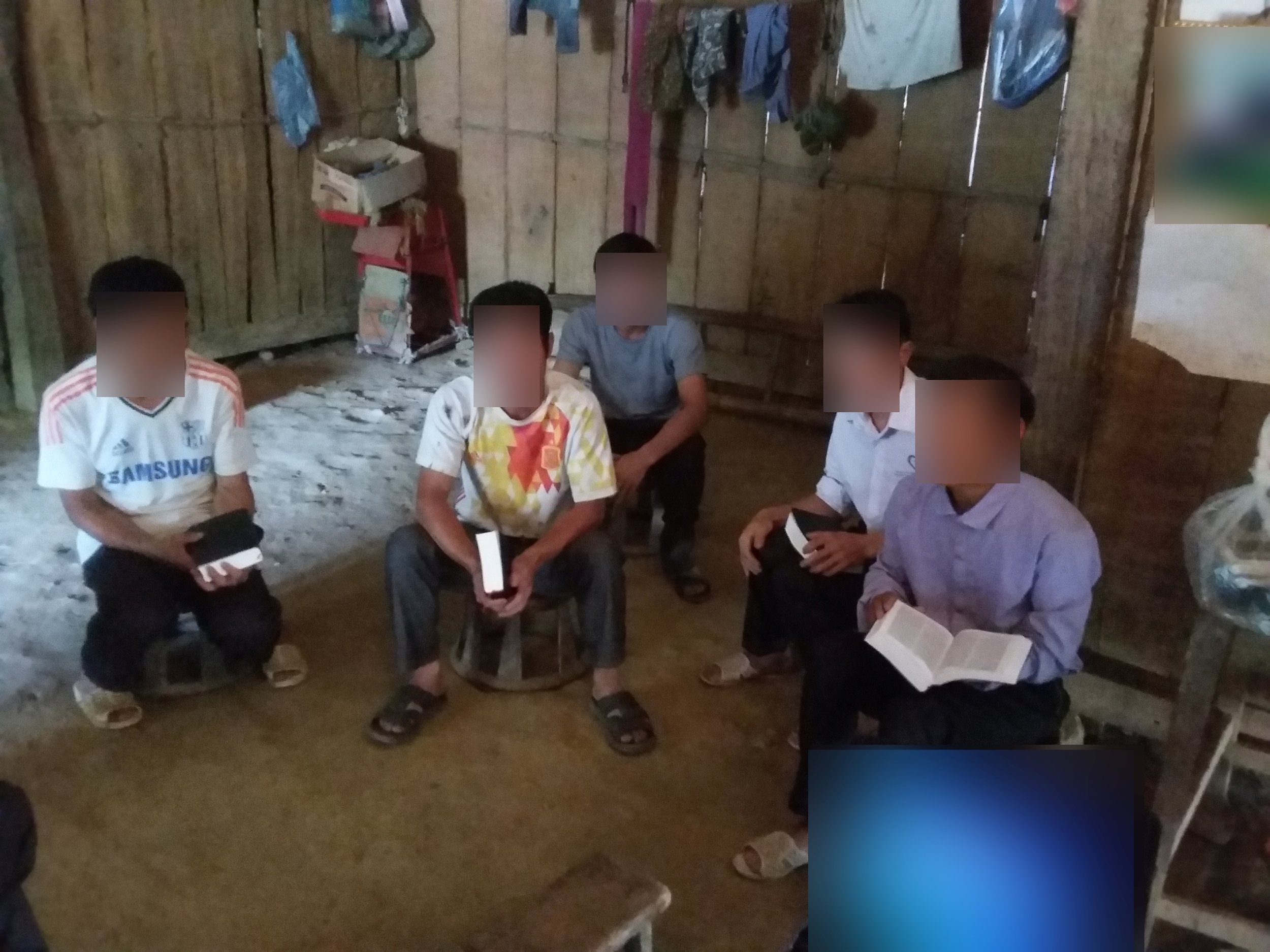 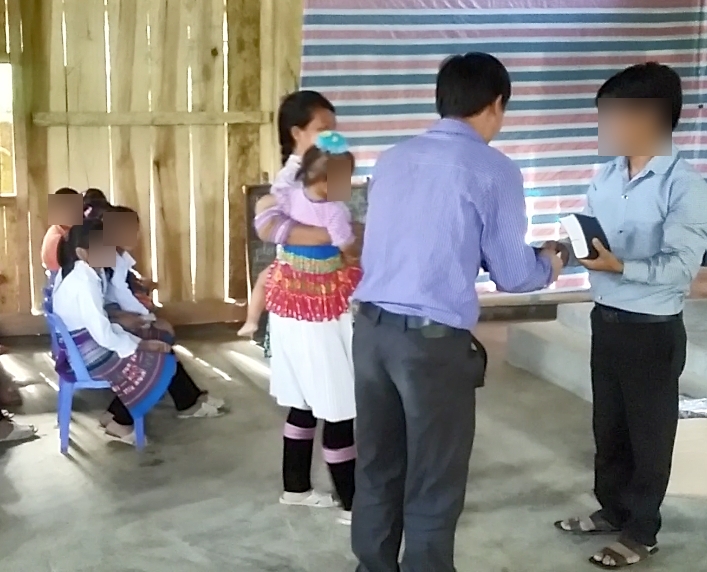 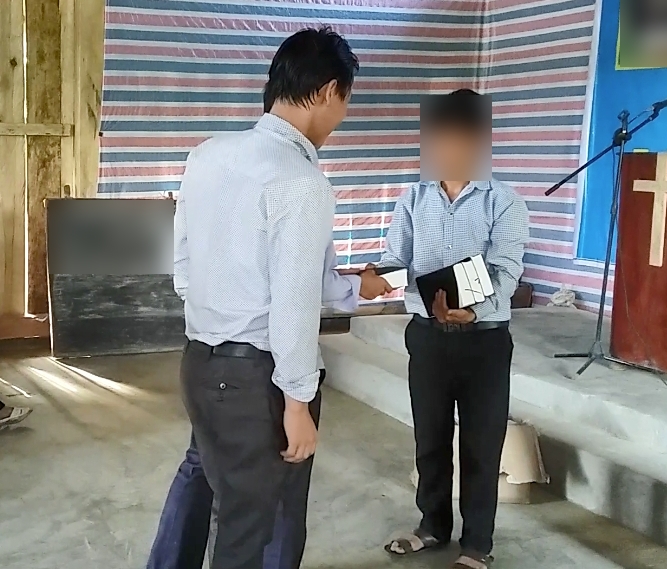 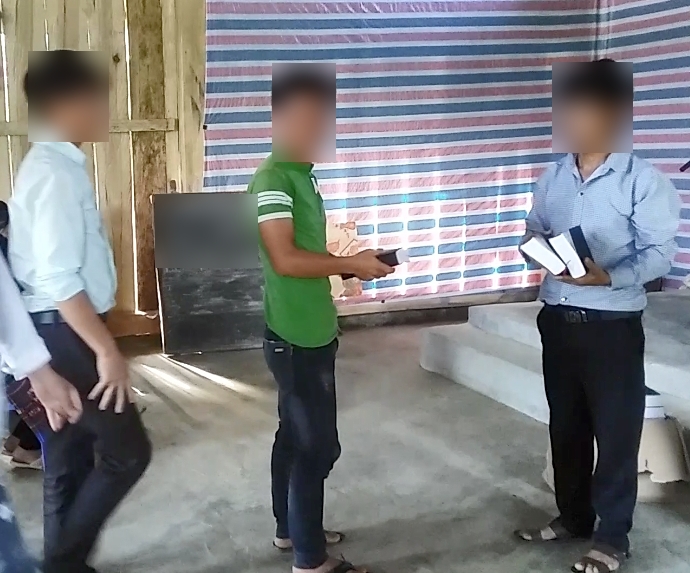 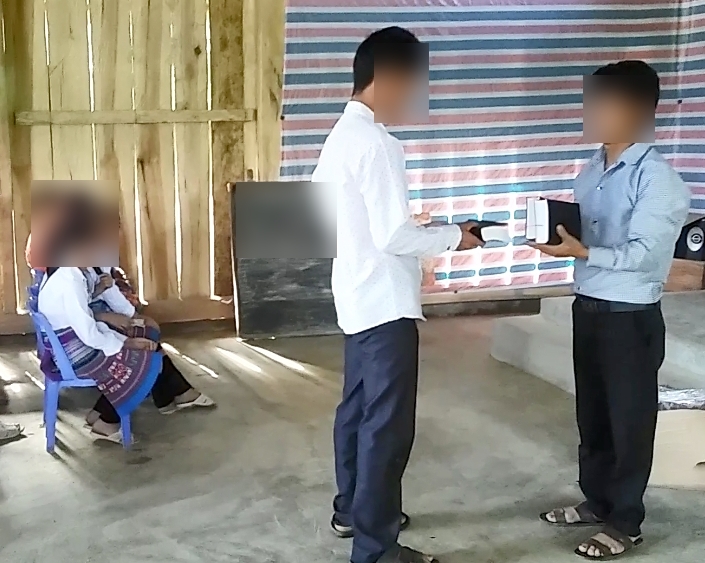 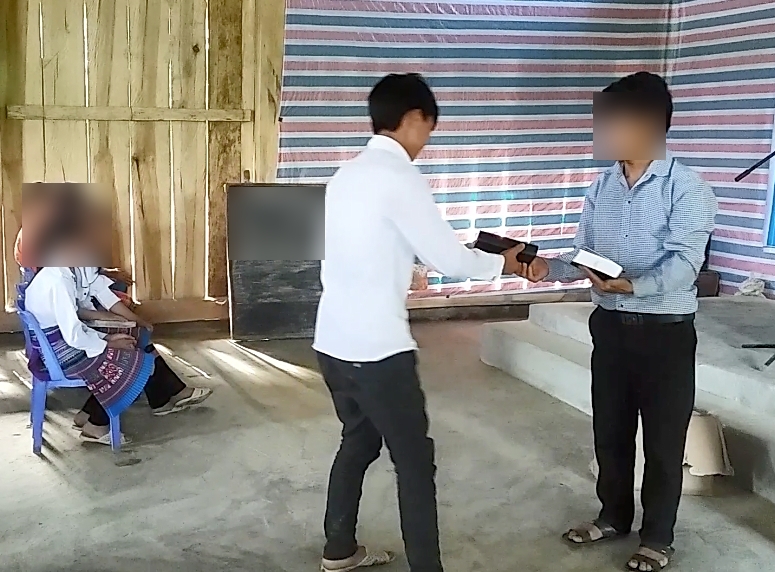 My name is NL. I have always lived in this village.  We live far away from the city and far away from modern progress.  We live in the mountains and we make our living from farming and raising animals.

I used to worship the spirits which is traditional Hmong worship.  Then on one Hmong New Year when we were supposed to burn spirit papers for our ancestors a conflict between families arose as to which way was the right way to perform the spirit rite.  The conflict was sharp with lots of shouting and this caused a rift between the relatives.  Some of the family members had mentioned that “The Way of Faith” was a good way.  My older brother and my brother-in-law had become Christians before and they encourage my younger brother and I to believe in God.  So we believed in God.  But when we made that decision I didn’t have even the most basic understanding of anything concerning believing in God.  I didn’t know anything about what it meant to believe in God.

I was illiterate.  At that time we didn’t even have an alphabet for the Hmong Boua language.  So after coming to Christ I learned to read Blue Hmong.  I would ask others who knew how to read what the names and sounds of the letters were. God helped me to learn to read and I was able to get a copy of the Blue Hmong Bible and I started reading.  It didn’t take too long to learn that I was a pretty pitiful person.

When I studied the Bible I saw that God had helped me and this was very good.  From the time that we believed in God in 2002 our country began to persecute us.  In that year the local government decided that they didn’t want us Hmong people believing in God and they forbade us new believers from having faith in Christ and they made life very difficult for us.  We were forbidden to meet together as a church and we were forbidden from worshipping God together.  The government sent police to live in our villages to make sure that we didn’t worship together.  They believe that Christianity is a foreigner’s religion and that anyone worshipping Christianity was working with foreigners to hurt Vietnam.  So they would ask us we believe in God or if we believe in foreigners.  We said we were worshipping God, but the police said that if we didn’t worship our ancestors then we were wrong and they would not let us be wrong and they wouldn’t let us believe in God.

But we found ways to meet together to discuss where we were going to meet for worship.  After we discussed this we then would normally meet in a house that was outside of the village and far enough away where people normally did not go.  But the police were persistent in seeking out our meeting places, and some people would turn us in and the police would come and break up our meetings and persecute us.  But we would move around to different homes to meet, but we were always afraid when we got together to worship.  When we kept meeting together the police took us to the police station and tried to get us to sign documents forcing us to pledge not be involved in the worship services of the Christians.  Some families were forced to sign, but at first I refused to sign.  But after so much pressure from the police, and I was not renouncing my faith, I also signed to get them to leave me alone.  But then something interesting happened.  The police suddenly realized that if the Hmong people had faith in God that the community improved.  So now they leave us alone and we can make the decision to believe in God and worship God together.  And today I have received a Hmong Boua Bible.  Now we know that God is also the God of the Hmong Boua people.  God is not the God of only the White Hmong or the Blue Hmong, but He is the God of every tribe on earth.  He is the one who created the heavens and the earth and every person.  So I give thanks to God for this Hmong Boua Bible, and I am happy that everything happened in the past is in the past and we have learned from it.  And now that I read the Bible in my own language I am understanding it better.  I am so grateful for this Bible.  I don’t have any way to repay you who provided these free Bibles for us, but God will reward each and every one of you for your charity and love for us.  Thank you very much and God bless you.

Give to help keep These projects going